Examples : Hotels, Events, Activities
Home / Discover / Preserved and living nature / An abundance of Nature
-A +A

An abundance of Nature

Unique and unspoilt, the nature of the island is based on a fragile terrestrial and marine ecosystem.

The strictly enforced environmental awareness regulations are funded by a green tax which each vehicle pays on arriving on Ile de Ré at the entrance to the bridge. Also protected: the island's biodiversity, which is as varied as it is rich – and can be discovered by visitors who want to see Ile de Ré in a different light.

AN ISLAND THAT'S A PARADISE FOR BIRDS AND BUTTERFLIES

With 218 recorded species, Ile de Ré is a paradise for birds and is of great interest to ornithologists, particularly for its wintering birds (65 species) and migratory birds (56 species), which create a remarkable local avian fauna.

Recognised by RAMSAR, Ile de Ré is a place of international importance for six species of wintering bird and welcomes in excess of 20,000 shorebirds (small waders) each year.

Situated in the heart of the migratory route that leads to Africa and the wintering and breeding grounds of the northern hemisphere which stretch all the way from Canada to Siberia, Ile de Ré is a meeting point for the many birds that cross France.

In terms of nesting species, of particular ornithological inte-rest is the island’s wide variety of woodland, meadow and grassland birds, as well as its large number of marsh birds, including the ele-gant avocets and stilts! Nestling in the north of Ile de Ré, the Lilleau des Niges Nature Reserve, which is managed by the French League for the Protection of Birds (LPO), offers birdwatching and guided tours all year round for the whole family.

Of the 41 local species of butterfly, visitors can discover the incredible history of the Large Blue, a rare butterfly which is found in the oregano grasslands around Rivedoux bay, or the much more abundant Cardinal, often to be seen in areas of woodland, not forgetting the island's 28 species of dragonfly!

THE FORESHORE SHELLFISH AND CRUSTACEANS

The island's foreshore, or the part of the coastline which is continuously covered and uncovered with the tides, is exceptionally beautiful and varied and home to an abundance of flora and fauna. It is a place that children love to explore and where they can find any number of molluscs and crustaceans: periwinkles, mussels, clams, shellfish, crabs and shrimps, not to mention sponges and starfish. At high tide, when the currents are strong, these rocky plateaus which stretch for as far as the eye can see become the haunt of the local fishermen, who go there as much for the crabs and shrimps as they do to enjoy the beautiful surroundings. The foreshore sustains some 84 species of flora, of which 9 are considered to be rare.

Visiting tourists are made aware of the fragile ecosystem and the local eco-rangers, who ensure compliance with the local regulations, are a common sight. 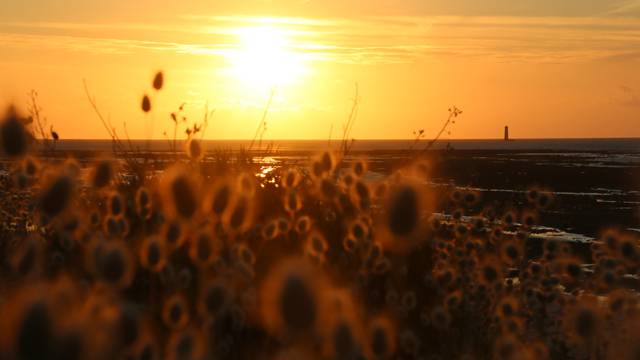 Campsites in the heart of nature