Examples : Hotels, Events, Activities
Home / Discover / Preserved and living nature / Beaches that change with the seasons
-A +A

Beaches that change with the seasons

The incredible landscape of Ile de Ré: with some 100 km of coastline, the island boasts some of the most beautiful beaches in Europe.

The beaches are exceptionally varied and the atmosphere varies from one to the next: whether peaceful or lively, there's something to suit every taste!
The longer beaches with their fine sand, such as Le Bois-Plage and La Couarde, are mostly situated on the south and west coast of the island and are surrounded by dunes or woodland.
These beaches are more sheltered and tend to offer better bathing than those in the north, where the coastline is characterised by its small, rocky coves and attractive marinas (Saint-Martin-de-Ré, La Flotte, Ars-en-Ré).  In the far north of the island between Phare des Baleines and the village of Les Portes-en-Ré, however, is the superb beach of "La Conche des Baleines".

At the end of Ile de Ré, close to the golf course and the Bucheron shoals, the coves of "Trousse Chemise" are full of charm and give you the feeling of being at the end of the world. The wild coastline (known as the Côte Sauvage) of Sainte-Marie and Saint-Clément is more peaceful, and is a popular amateur fishing spot. Finally, Rivedoux-Plage is the only village that has its own harbour and two large sandy beaches that stretch along either side of the Pont de Ré bridge. 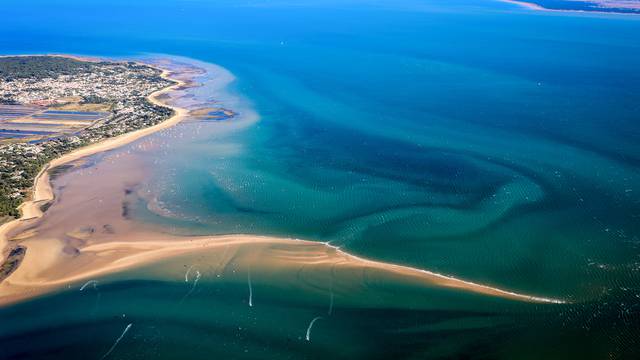