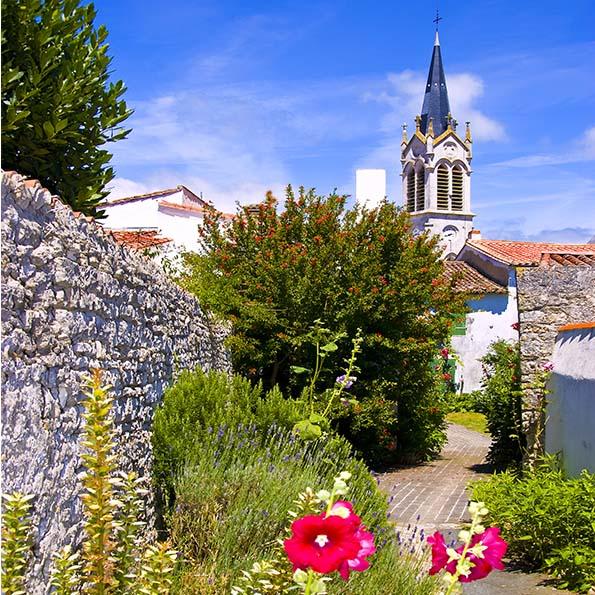 1 Departure - Tourist office of La Couarde-sur-Mer
Follow Rue Pasteur and look for a sundial… An afternoon sundial: it is engraved and painted.
Then reach the square in which stands an unusual monument. 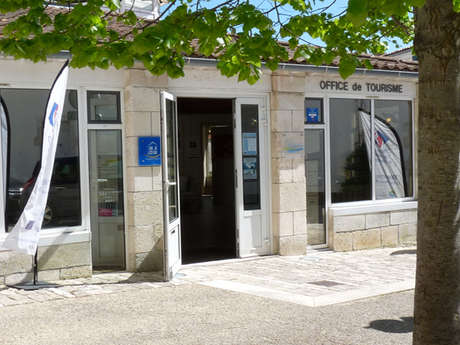 2 Stop 1: Bonnin Square
Discover our unusual war memorial… This monument whose design is very peculiar was erected on a site given to the local authority by Georges BONNIN in 1919 in honour of his only son – a pilot who was killed during World War One. You can notice the imposing bronze eagle. The architect, J. Godefroy, presents the monument: “This monument should remind that the enemy was stopped thanks to the heroic bravery shown by the ‘Poilus’ (WWI French veterans). The German imperial eagle broke its head on the great wall they had erected with their chest on the road to invasion.”

In 1940, during the German occupation and in order not to be destroyed by the enemy, the eagle was taken off and hidden under a pile of wood in the former market situated next to the wall of the church (the place where Tourist Office is situated today). The Germans who had seen postcards representing the eagle had looked for the “big bird”, but the secret was kept all the inhabitants of La Couarde sur Mer and the eagle was not found! At the end of the war, the monument was installed in the square again.

In front of the school, turn right and take the small street Rue de la Raigon.

3 Stop 2 : Former railway station of La Couarde
The train called ‘Le Tortillard’ which stopped here was first a passenger train and then a freight train (salt was first sorted and then transported to the harbour of Saint-Martin). It was immediately a great success and, in 1899, over 145,000 tickets were sold, 408 tonnes of luggage and 282 tonnes of goods were transported… But, the journey was very long: 2 hours and a half to 3 hours from one extremity to the other extremity of the island (with a stop at Saint-Martin in order to clean and feed the boiler). Furthermore, it was often late, it regularly squealed and derailed.

The last journeys of the train took place in 1935. The railway tracks were reused when the island was occupied during World War Two.

Today, there are cycle paths. The only important vestiges can be found at Ars (the railway station in the harbour) and at Les Portes (the locomotive warehouse).

4 Stop 3 : Atelier de Verre
Maryvonne BRULLON invites you to discover her glass workshop with unique pieces she makes according to three techniques she uses depending on the objects she creates. 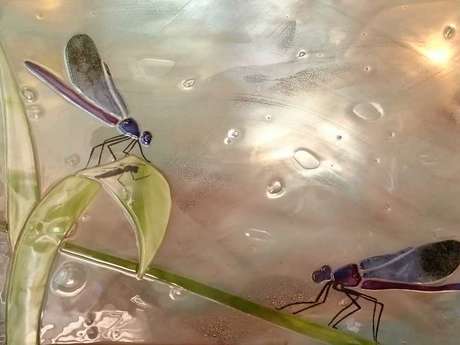 5 Stop 4 : Le Chenal du Goisil
To the north of the village of La Couarde, you will find the nautical base and its lake covering a surface area of over 2 hectares. It is perfect for the introduction to sailing activities in total safety. Chenal de Goisil is a small picturesque and bucolic harbour, or more exactly a “mooring basin”, that inspired numerous painters and is still making poets dream.

6 At the intersection, take the cycle path in the direction of Loix
For the more energetic, bear right in the direction of the salt marshes and Loix! If you have not enough time, bear left!
7 Stop 5 : Salt Marshes
From June to September, in good weather, you may have the opportunity to watch salt workers. One of them offers visits and gives demonstrations of his work. Follow the cycle path leading to Loix. After the bend, you will meet him.
8 Would like to eat seafood?
If you wish, bear right in order to meet one of Île de Ré’s oyster-farmers who offers visits and tastings depending on the periods of the year. If you don’t feel like it, continue straight on.
9 Stop 6 : La Rhétaise
Situated right in the heart of the salt marshes, the oyster farm ‘La Rhétaise’ will be a well-deserved stop on your biking excursion. You will be able to discover this authentic farm - a real haven of peace.
Florine and Franck welcome guests from Easter to All Saints Day and are happy to make you sample home-produced oysters or mussels at any time. 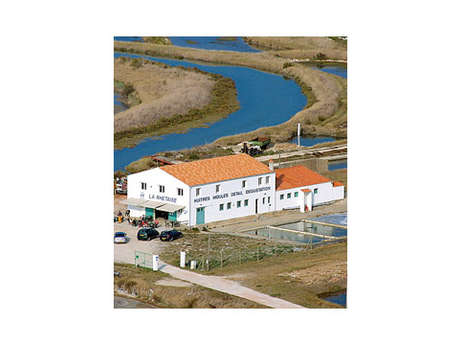 10 Stop 7 : La Tour des Prises
Now you are following Chemin de la Grifforine. Soon you will see a square tower to the left. This is ‘Tour des Prises’. In the 14th century, while La Couarde was developing its economy thanks to salt marshes and vineyards, the island’s rich landlords and farmers had imposing houses built. After numerous building works carried out by various landlords, this square tower is a relatively new structure that replaced the vestiges of the former ‘Domaine des Prises’ which has been converted into an attractive campsite today.

Look out! You are going to cross a very busy road! Be careful!

11 Stop 8 : Plage des Prises
Now you are on the southern side of Île de Ré. Long sandy beaches stretching for kilometres await you and numerous water-based activities are offered.

(If you are travelling on foot, continue and take the coastal path at the top of the dune until you reach the car park of the beach La Place du Peu Ragot - Waymark: yellow circle).

If you are travelling by bike, head back to the centre of the village and follow the path Chemin des Brardes.

12 Stop 9 : Beach of Peu Ragot at Mistinguett’s time
Early in the thirties, La Couarde was the first seaside resort of Île de Ré. It attracted numerous visitors who wanted to swim in the ocean. At that time, beaches began to be equipped with beach huts, cafés and several chalets that were installed on the dunes of La Couarde. One of those chalets was built by Mr. Macabiou on the present-day beach of Peu Ragot. It was in that chalet that the famous artist Mistinguett used to spend several days. Beach huts were in fashion at that time. Unfortunately, the ‘Macabiou’ chalet and the other chalets were destroyed during World War Two.
13 Stop 10 : L'Eglise Notre Dame de l'Annonciation
At the heart of the old village stands the parish church of Notre-Dame-de-l’Annonciation. It was built in 1865 just in the place where the previous one stood. The old church was named the Daughter Church of the parish of St Martin under the Ancien Regime. The new sanctuary inherited altars, baptismal fonts, statues and ex-votos from the old church. 19th century classicism is clearly expressed in its architecture. Note that the epigraph “French Republic. Liberty – Equality – Fraternity” is still engraved in the stone over the main door since the parish church was used as a “temple of the truth” under the French Revolution.
14 Stop 11 : Kiosque à Musique
Île de Ré’s last bandstand still exists and it stands against the church of La Couarde. It was constructed in 1895; it was completely renovated in 1989 with the support of local authorities, various subsidies and the generosity of the inhabitants of La Couarde. Its base is made of bricks and topped with a wooden structure therefore providing a hint of poetry to this modest building. As soon as the sunny season starts, the bandstand hosts numerous concerts…
15 Arrival
Thank you for following our itinerary!

Special offer: for 2 tickets for adults bought, 1 ticket for child offered with the code “APPLI”

41 meters of difference in height